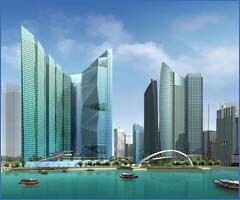 The first phase of Singapore’s new downturn business hub will cost S$2 billion to develop.This is according to Keppel Land, which is one of the developers for the massive project.When it is completed in 2010, the newly-named Marina Bay Financial Centre will double Singapore’s premium office space supply and add even more high-end residential units to the area.

Singapore’s downtown skyline is set for a major transformation in four years.

The first phase of the Marina Bay Financial Centre will see three towers being built.

One tower will have 428 top-end residential units.

David Martin, GM, Marina Bay Financial Centre, said: “On the residential, our agents have received a lot of pre-interest. I don’t have specific figures. But that interest has come from Singapore, it’s come from the region and I think some from further afield than that.”

Beyond the residential building, there will be two office towers, which will add some 150,000 square metres of prime office space.

This will double the supply of prime office space in the area by the time they are completed.

While no numbers were given, some consultants noted that sub-sales of the residential units at the adjacent The Sail @ Marina Bay have been transacted at as high as S$1,600 per square foot.

And they are also bullish on the prospects for the office component.

Moray Armstrong, Executive Director, CB Richard Ellis, said: “The consortium here would like to build upon the successful leasing campaign conducted at One Raffles Quay. Towards the end of the campaign, the last series of transactions exceeded the $10 benchmark and I think they will be hoping to push beyond that going forward.”

One Raffles Quay, with net lettable space of 120,000 square metres, has already been fully tenanted.

The consortium has an option to purchase the remainder of the Business and Financial Centre within the next eight years to develop another 194,000 square metres of floor space.

The consortium revealed the cost of land for Phase 1 is S$1.1 billion, while another S$900 million will go into construction expenses.

But the group believes the huge cost will bring other spillover benefits.

Kevin Wong, Managing Director, Keppel Land, said: “This partnership is not only the partnership between Cheung Kong and Hong Kong Land but also the partnership with our own government which has spend tremendous effort in attracting foreign investments as well as trying to make Singapore a financial hub.”

Singapore has said the Marina Bay Financial Centre will reinforce the government’s vision to create a vibrant environment for people to live, work and play in the downtown area.

For more information or to register your interest, email [email protected]

The building will be "sensitively renovated," with special attention made to preserving its major...
Continue reading

At a tender procedure that ended on April 26, 2022, Verdun House, an en bloc site in Farrer Park...
Continue reading