Jurong East: A future gold mine

UNLIKE Jurong West, which boasts over 70,000 homes, Jurong East has always been viewed as a rather sleepy estate with just over 22,000 homes. Even neighbouring Bukit Batok and Clementi have over 32,000 and 24,000 homes respectively.

Other than the Singapore Science Centre and Chinese Gardens, there was not much going for Jurong East in terms of entertainment. 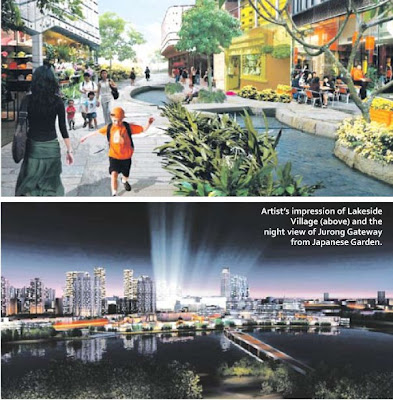 However, plans to revamp the area could change all that.

Gleaming office towers and a swanky new Olympic-sized ice-skating rink would make up the 70-hectare Jurong Gateway precinct, while serene parks and exciting water-based activities on the lake would be a part of the 290-hectare Lakeside precinct.

Imagine the quiet estate of Jurong East radically and beautifully transformed into a self-contained nucleus of its own; with businesses, recreational areas, swathes of nature, entertainment venues and food and beverage outlets all interconnected with overhead walkways and viaducts.

This is a facelift of immense magnitude, which will inject much dynamism into the neighbourhood.

With the decentralisation of businesses, commuting times will be greatly reduced. This will in turn allow Jurong East residents more time to enjoy the added recreational amenities and “edutainment” facilities.

With the prospect of an improved work-life balance, we can expect to see an increase in the buying and renting of property in the Jurong East district. With this, the value of the more than 22,000 dwellings is likewise expected to go up.

We can expect to see, in the initial stages, a marginal 5- to 10-per-cent price increase in the properties there. However, upon completion of the many facilities and amenities, and as more businesses gradually shift their operations to the new Jurong Gateway precinct, we should even be able to see price increases of 30 to 50 per cent.

We can also expect to see a spillover effect from the revamped Jurong Lake District in the surrounding hinterland towns of Bukit Batok, Clementi and Jurong West.

I would strongly encourage Jurong East residents to hold on to their properties due to the strong prospects for a high resale price upon completion and establishment of the Jurong Lake District. For long-term property investors, Jurong East should definitely be seeing great returns in the next decade.

Mohd Ismail, chief executive of Propnex.The views expressed are his own.